Why is Lyme disease so difficult to detect and diagnose?
Lyme disease diagnosis is complex and lengthy. Lyme disease symptoms can appear quickly or gradually over time and are incredibly varied. The first physical signs of Lyme disease are often flu-like symptoms which could be confused with the flu or the common cold. Erythema migrans (EM) skin rash is the most common manifestation of Lyme disease with up to 80% of infected persons developing a variation of this skin lesion in the first weeks of infection.

Borrelia burgdorferi bacteria which cause Lyme disease have a spiral shape and penetrate human tissue like a corkscrew to enter the bloodstream, use up to 10 flagella to speed through the bloodstream, and survive outside of the bloodstream because they do not require iron. Unlike sepsis-causing bacteria, Borrelia does not stay in the blood for a long time.

Patients infected by Borrelia produce antibodies which are used to detect Lyme disease becuase of the variability and high cost of directly detecting Borrelia. In 1994, a 2-tiered antibody testing strategy was adopted by the CDC in which a first-tier ELISA test was used to detect possible cases, and a second-tier test Western blot was added as a more specific confirmatory step to rule out false positives.

Other tickborne pathogens are increasing transmitted with Borrelia including bacteria (Bartonella, Rickettsia, Mycoplasma), protozoa (Babesia), and viruses (Powassan) which can require different treatment to resolve and different tests to detect.
Guanine will improve acute Lyme disease test sensitivity from 46% to 85-95%
The standard two-tier testing (STTT) process employs an ELISA antibody screening test followed by a Western Blot confirmation test for IgM proteins. STTT test performance for acute Lyme disease detects only 46% of infected patients. As a consequence, the majority of Lyme disease patients are not detected by testing in the acute stage and incur late stage Lyme disease which is more difficult and expensive to treat. 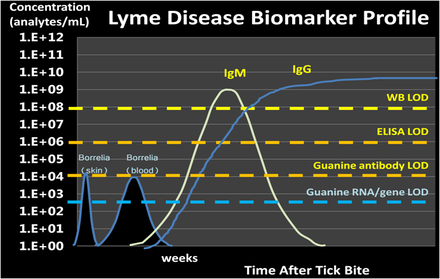 Lyme disease is confirmed by the presence of 2 of 3 IgM proteins as visible bands. One of these proteins p41 is associated with the Borrelia flagella which is common to other microbes such as syphilis bacteria as is a source of false negative tests for Lyme disease. WB has a limit of detection (LOD) of about 10^8 analytes/mL, compared with about 10^6 for ELISA.

As a consequence, patients with low antibody production rates (i.e. immuno-suppressed, HIV, elderly, patients taking certain medications), are unable to attain IgM production of 10^8 analytes/mL and produce a false negative test result. IgG is a more specific biomarker than IgM however, it can remain in the blood for years after an infection, making positive IgG antibodies unable to distinguish a new infection from a previous infection. 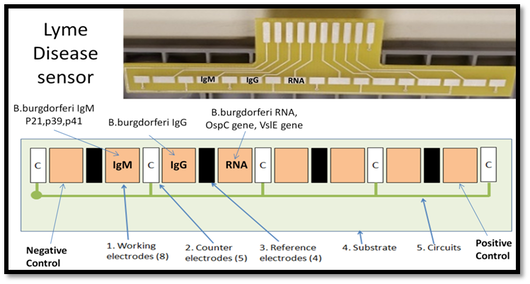 The Lyme disease test will be expanded to detect other tick co-infections from the same sample.

In addition to testing, individuals can validate suspicious rashes and symptoms using AI tools that reduce misdiagnosis by expanding the criteria for ruling-in suspicious infections for testing and for differential diagnosis after test results.